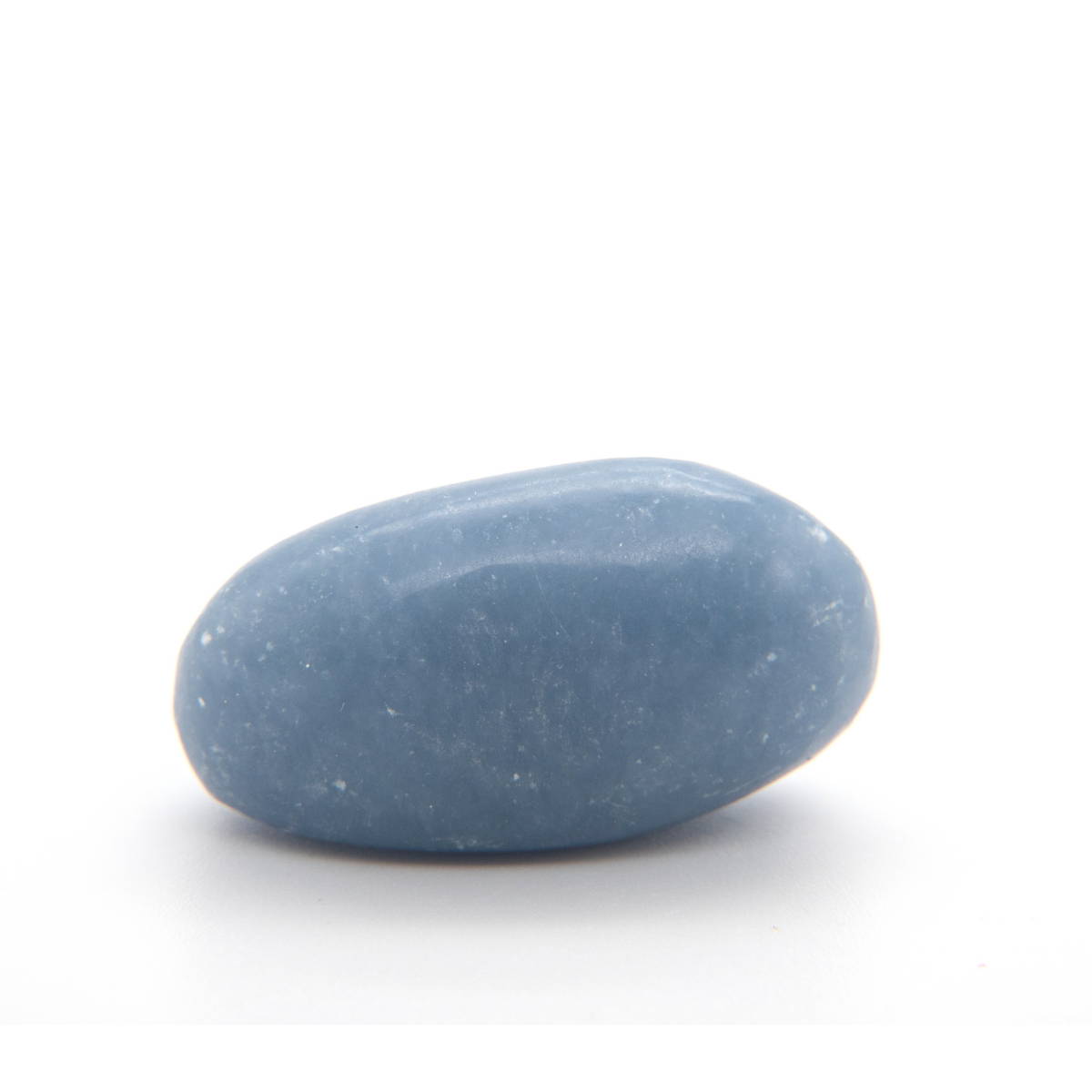 Angelite radiates spirituality and healing. Angelite crystals bring a soothing and peaceful energy. Light and love flow from Angelite crystals, lulling the soul toward a higher state of consciousness with its calming and soothing vibration. A stone whose shades are as soft as angel wings, Angelite lets you feel its ethereal energy and inner messages directly from the other side.

Find out everything there is to know - the meaning of the Angelite crystal, its symbolism, and also how to use it in your life.

Angelite is a kind of gypsum formed from calcium sulfate. This lovely blue stone is generated after millions of years of compression of celestite. It's a delicate crystal with a faint blue tint that absorbs a lot of moisture.

This heavenly stone was discovered in Peru in 1987. Angelite also goes by the name Blue Anhydrite, meaning "without water" in Greek.

Angelite stones is formed in dried-up areas where gypsum crystals are used to soak in water. In the following thousands of years, the water evaporated, compressing the gypsum stones and giving birth to sacred blue Angelite.

Angelite has been mined in many countries since its discovery in Peru, including Britain, Poland, Libya, Germany, Mexico, and Egypt. 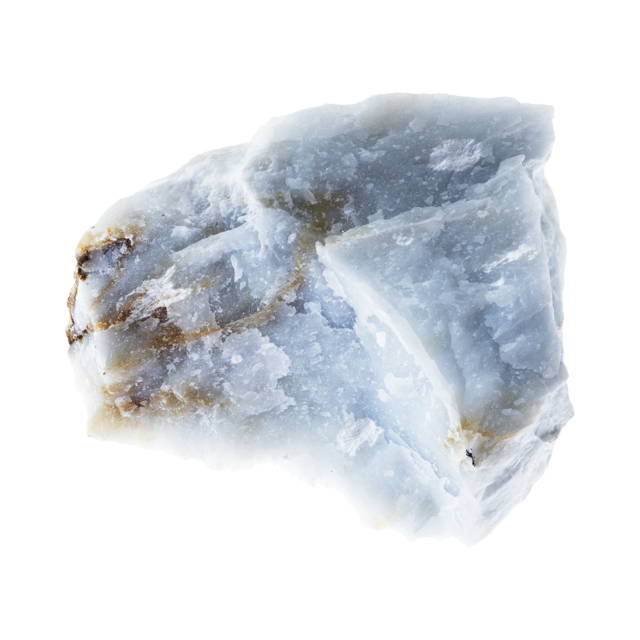 Angelite’s energy and appearance are as gentle as silk. The crystal will be transformed back into Gypsum if placed in water, a reminder of the mystical energies and angelic realm that are permeated through it. It also contains calcium sulfate found in celestite, which is a cerebral crystal.

The calming nature of Angelite, its connection to a higher purpose, and its elevated spirit make it the ideal stone for those on a journey of spiritual awakening.

As its name suggests, Angelite crystals help you connect with the Angel realm. Its meaning is connected to a higher understanding of spirituality and purpose. Using this stone helps you to explore your dreams, intuition, meditation, and self-expression, as well as finding inner peace. Take advantage of Angelite's healing properties for your mind, body, and spirit.

Angelite's strongest properties are spiritual healing, yet it also has physical healing properties. Having a clear, open mind can be extremely beneficial to your health. Angelite has amazing healing properties for the physical body. It helps the body fight infection in the throat and balances out the thyroid gland.

The mineral Angelite not only revitalizes the blood vessels and keeps the heart strong and healthy, but it also nourishes your whole body. Additionally, it reduces weight, can ease headaches, and can support the body's immune system.

Angelite crystals are excellent to use if you want to live a life of purpose and intention. Use Angelite crystals for anxiety, or if you are overwhelmed by anger, resentment, or even guilt, Angelite can help clear all that toxicity.

This stone transmutes beautiful positive and serene energy, bringing peace and healing to the heart, and allowing you to be connected to the cycles of breath that bring you into conscious awareness. 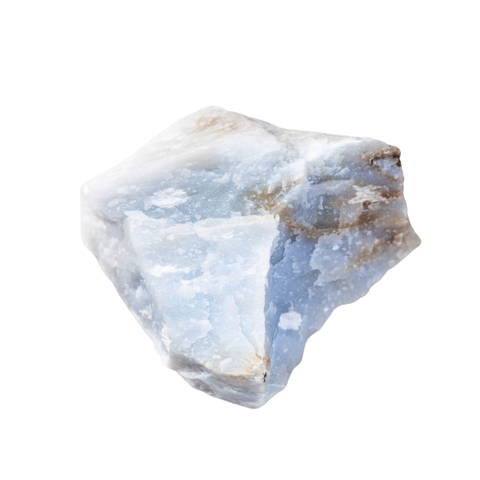 The Angelite stone shines most brightly in the metaphysical realm. This highly spiritual crystal is a powerful cleanser of negative energy that helps you access your psychic visions, telepathic connection with spirit guides and guardian angels, and the ability to contact divine knowledge.

Angelite works on the chakras beginning at the throat chakra and working upwards. Through the throat chakra, we communicate our sense of self. As the third eye chakra serves as a place of deep intuitive wisdom, it allows us to tap into our emotions and connect with those around us. Our crown chakra helps us to connect to a higher truth.

As A Zodiac Birthstone

Angelite's gentle blue colors make it the perfect gemstone for those born under the water sign Aquarius. Aquarius is a sign of intelligence, independence, and individuality. Aquarians are optimistic, but they can also come across as distant and lacking emotional connection. Angelite ensures they can make deeper connections beyond the surface level.

Angelite's calm qualities and peace of mind enable Aquarians to stay focused on their true purpose and achieve spiritual prosperity.

How Do You Use Angelite?

Angelite can be incorporated into your life in many ways. Featuring a delicate, blue-tinted appearance, Angelite’s delicate crystal is perfect to wear as gemstone jewelry. You can simply place Angelite on your altar or weave it into your spiritual practices.

Angelite is a great option if you are looking to add more spiritual awareness to your living space. When placed in your space, Angelite can immediately create feelings of calm and serenity.

Angelite crystals can be placed under a pillow or in the bedroom of someone who wishes to practice lucid dreaming or journey into the spirit world while asleep.

In spaces where toxicity or negative vibes are more likely to accumulate, Angelite can also be placed there to help keep it fluid, fresh, and more attuned to higher thinking.

Wearing an Angelite bracelet or other Angelite jewelry is an excellent way for you to take advantage of this rich, angelic gemstone. Having the soothing blue hues of Angelite press against your skin is a wonderful way to let natural healing light and vibrations instantly sink in.

Wearing or carrying Angelite throughout the day helps you to become open to any spiritual guidance that the world has in store for you.

How Do You Cleanse And Charge Your Gemstone?

You must keep your Angelite Stone in a healthy state, so it can accomplish all the work that it needs to perform. Crystals are known to accumulate toxic energies, and that's why it's important to have a regular "de-charging" session to clear out any residual energy.

Angelite is a soft stone, so you don't want to use harsh cleaning methods. Cleanse your Angelite by waving sage smoke over it and rubbing it. Alternatively, you can soak it in spring water for a short period. Angelite can be charged up by keeping it close to a crystal cluster, or by placing it under the full moon for the night.

Angelite is suitable for those who are ready to overcome the limitations of their mortal lives. This crystal encourages you to cultivate your psychic perceptions and your sense of self, so you can truly reach beyond the periphery. Angelite is a beacon that calls us out from the darkness as it cleanses away toxicity and negative vibrations and fills us with love, peace, and opportunities for joy.

Want to learn about even more gemstones?  Check out our Gemstones Page!