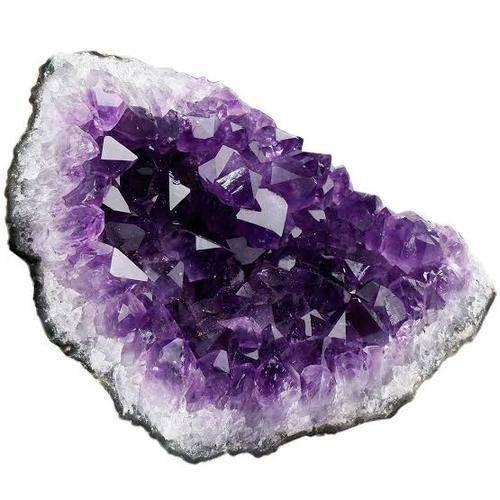 Amethyst is a popular gemstone that has long been used for multifaceted purposes as well as worn for its beauty. With its various tones of eye-catching purple, this gemstone is one that is readily available and eagerly purchased. Found in a wide variety of areas, including Bolivia, Brazil, Mexico, Africa, Russia, Canada, Europe, and the United States, the supply is definitely high as is the demand.

Amethyst has a long history and heartfelt meanings attached to it. There are also many ways to put this lovely gemstone to good use.

The history of amethyst is a lengthy one and how amethyst has been used throughout the centuries is quite varied. Around 25,000 BC, amethyst was displayed as a decorative emblem. As for the Ancient Greeks and Romans, they used amethyst for many purposes, including for use in amulets, to make beads for jewelry, and for many other reasons.

Throughout the centuries, amethyst was regarded as a luxury stone and was often a part of crowns, royalty rings, and scepters. For example, Christian bishops would wear amethyst in their rings. The color of amethyst was thought to symbolize royalty and allegiance to Christ, which is why it often appeared in jewelry worn by royalty and religious figures. Catholic clergy members adorned their crosses with amethyst as a symbol of celibacy and piety.  Amethyst, and not just purple-colored glass, the metaphysical properties are the same. And laboratory Amethyst sidesteps

To this day, amethyst appears in many different forms and has a variety of meanings attached to it that relate to current day.

The word amethyst is derived from the Greek word “ametusthos” which means “not intoxicated.” The origin of the word comes from the Greek legend involving the wine God Bacchus who was in a fit of anger due to having been insulted and stated that the first person he came across would be eaten by his tigers. This unfortunate person was a lovely maiden named Amethyst Crystals who was headed to the shrine of Diana. When the tiger lunged at her, she asked for protection from the goddess Diana who turned her into a clear crystal. Bacchus in return, sorry for his cruel behavior, poured juice from grapes over the crystal, turning it purple. As a result, the meaning behind amethyst Crystals was that it would inhibit the intoxication and overindulgence of all who wear the stone.

The meaning of amethyst Crystals is different under the Chinese philosophy of feng shui. In feng shui, amethyst is a symbol of wealth and is used in this practice to increase wealth for the individual.

Amethyst Crystals is also a protective gemstone. Wearers and collectors of amethyst are often attracted to this stone for its protective qualities. It protects from nightmares and insomnia in addition to providing general protection.  stone for every crystal lover’s collection, the Amethyst crystal meaning is powerful for a variety of intentions. This

For those who crave a calming stone, amethyst is it. This gemstone works to calm both the mind and spirit, allowing for the wearer or holder to relax and feel contentment. Amethyst Chakra Healing and Balancing Energy Amethyst carries a high, sweet energy, particularly

With so many meanings attached to Amethyst Crystals, such as cleansing, inspiration, and protection, it’s easy to see why this gemstone is so highly sought after, both in the past and current day.

How to Use Amethyst

Now that you know about the multiple meanings behind Amethyst Crystals, you want to put this powerful gemstone to work for you. There are many ways to use amethyst in your daily routines. From wearing it as jewelry to using it in your feng shui placement, amethyst has many uses that you are going to want to try. Amethyst help with emotional healing? Amethyst’s emotional healing powers can help you cut through difficult 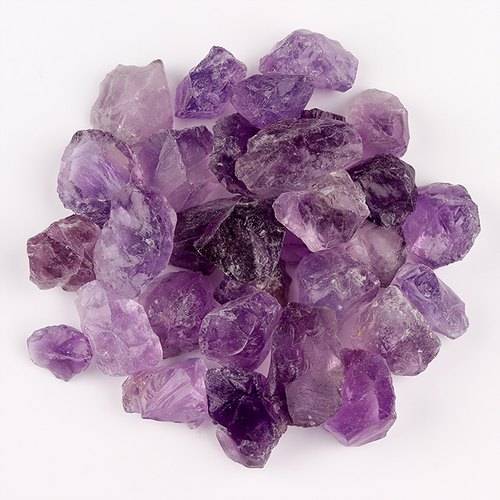 Amethyst Crystals is a lovely gemstone to wear as jewelry. With a variety of color tones to choose from deep purple, including light lavender, purple, and indigo, you can choose a piece of Amethyst jewelry that matches your desired color tone. It’s important to note that the value of an amethyst depends on its color tone. Generally speaking, the deeper the color, the more valuable the amethyst. Therefore, its value isn’t based on carat size like other gemstones may be. So, be sure to keep this in mind when shopping for amethyst, especially if you’re on a budget.

Amethyst is included in various jewelry types, such as rings, earrings, necklaces, bracelets, pendants, and more. No matter whether you want a small, subtle piece of Amethyst jewelry or a jaw-dropping visual display, you’ll be able to find what you’re looking for with this readily available gemstone.

Feng shui is the practice of looking at where we live and work and finding a balance with the natural world. Amethyst Crystals is used in feng shui as it relates to its purification qualities along with the ability of amethyst to connect with higher energy planes. It’s also an essential gemstone for helping with miscommunications and arguments and producing a calm environment. Amethyst activates spiritual awareness, opens intuition, and enhances psychic abilities also has an extremely strong ability to repel negative energies or people. If you don’t want the effect to be

As you put feng shui into motion in your home or office, here are some of the places where amethyst can be displayed and the results the amethyst placement will produce: properties to bring more peace, relaxation, and spiritual awareness into your life, you’ll begin to understand why

● Your study area or living room for a calming effect

Not only is amethyst a powerful energy gemstone, but it’s also a beautiful gem to have displayed in your home or office. With its unique purple color tones and creative designs, amethyst can be displayed simply because it looks nice.

You’ll be able to find amethyst geodes that have unique cuts and features. These are sure to appeal to you each day as you pass them by and will definitely be welcome conversation pieces when you have friends and family members over.

If you’re looking for a portable type of amethyst, an excellent option is amethyst stones. Polished amethyst stones can be purchased individually or in a stone collection. You can carry one in your pocket wherever you go or collect various stones and keep them in a small cloth bag for safety.

Each amethyst stone will have a unique shape and color, so it’s not only a great gemstone to collect for its energy but also for its eye-catching appeal.

Amethyst is a wonderful stone to include in your daily meditations. Its calming attributes will help you to focus and clear your mind as you meditate.

This gemstone also helps you with clarity and will enable you to get more in tune with your feelings as you meditate. Its intuitive aspects will help you to know yourself more and do so on a deeper level.

When you engage in meditation, make sure that one of the gemstones you have in reach is an amethyst. This stone will help you to achieve multiple tasks in one successful meditation session.

Using an amethyst when you are trying to clear or balance your chakras will help when you are working on your crown chakra, or sahasrara. The crown chakra deals with enlightenment, connection to our higher selves, and spiritual connections.

When you work on balancing your chakras and need a gemstone for your crown chakra, a white or violet gemstone is the one to choose. Amethyst is an ideal gemstone to have with you as you tend to your crown chakra helps us to relax, clears our mind, and releases negative energy and unwanted thoughts. Using crystal.

The violet color of the amethyst will stimulate meditation, universal flow, and intuition or eye chakra. To put it into motion, sit with the gemstones surrounding you, wear them as jewelry, or place them on your crown chakra. 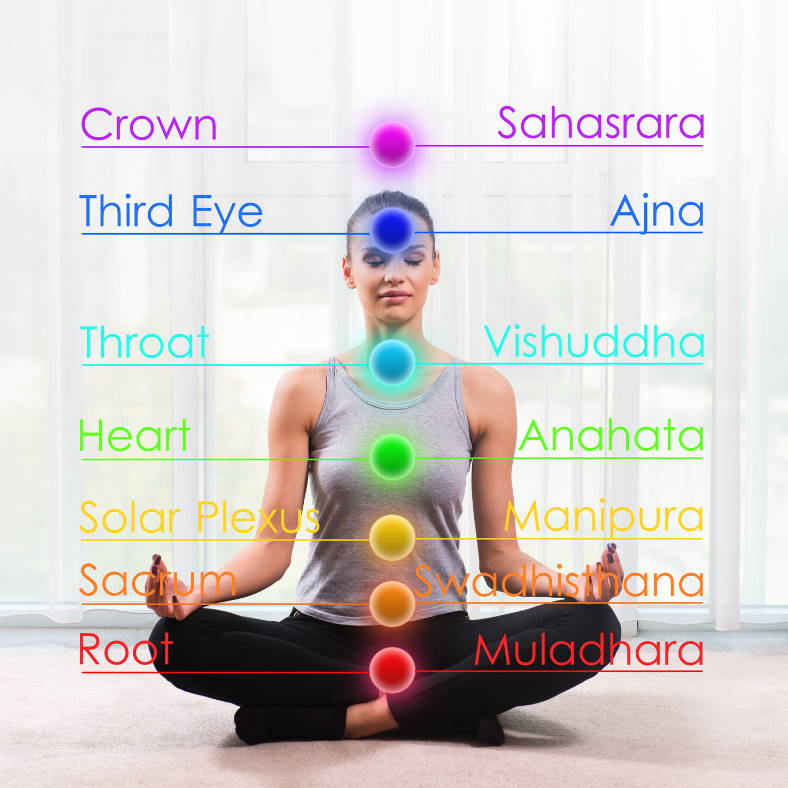 When you purchase the amethyst that’s been catching your eye for a while now, you want to make sure you treat it in the best possible way. You want to prevent it from scratching and keep it shiny and polished at all times.

Here are some tips for caring for amethyst:

● Clean your amethyst with mild soapy water, rinse, and dry with a tight woven microfiber cloth or other soft cloth

Although amethyst is a 7 on the Mohs scale, which makes it a durable gemstone, it can still scratch so be careful not to bang it or drop it and handle it with care.

Amethyst Makes a Great Addition to Your Gemstone Collection

Whether you’ve had your eye on an amethyst item for a long time now or simply want to add this gemstone to other stones in your collection, purchasing an amethyst is a wise move to make.

You can choose from various amethyst product options and jewelry pieces and select the one that you like the best. And, it doesn’t matter whether you want to use amethyst in your daily meditations and chakra balancing sessions or simply want to view its lovely aesthetics each day as you pass by it in your home or office. However you choose to use your amethyst, know that this gemstone is one to acquire.